A towering crucifix stares at me across the flat field that runs hundreds of miles to the south of us. God makes his presence known much more fiercely out here in the West, in the Plains, the non-East of wherever the fuck we are. A crowd of worshippers hovers at the base of the cross, doing god-knows-what. In a minute, they’re gone, the cross, the tiny shapes of bodies, the far away cars and the road shoots onward like a missile, soaring towards an unseen target.

It’s 9:45 in the morning, got up at 7:30 after falling asleep around 3 or so in our motel room. As we drove away from last night’s show (which bares no description- it was unremarkable), I gazed out the window into the void that loomed ominously forever. A cold moon glowered upon whatever out there I could not see. Greg insisted on playing “Televators” over and over, the only track that matters to him on the Mars Volta album. I listen to him argue, “They should have begun the album with this song. I listened to this on repeat for the entirety of my six hour drive home from practice once.” It is a long commute for a trivial band rehearsal. “It was awesome," he concluded.

As I stare into the belly of nothing, I pondered our lackluster show. What are we doing? What am I doing? Is this worth it? But I know this adventure has only just begun and that there is ample time and bountiful opportunity for things to get better, or to get worse.

The more I think about last night’s show, I realize it was a disaster, at least on my end. Technical snafus marred me all night. My new earplugs blocked out too much sound. But whatever, today is another day and tonight is another show. At the end of every show, I’m left feeling ecstatic or despondent. There is no middle ground. The most seemingly insignificant details can tilt the scales one way or the other. No one’s to blame really, well, not always.

I notice the shifts in geography and landscape as we drive deeper into the country. The trees thin out here, giving way to scrub brush and short sticks with tufts of green on top that look like lollipops. The ground still sprouts grass but I know it will soon turn to sand. Are we still in Oklahoma? Texas? New Mexico? 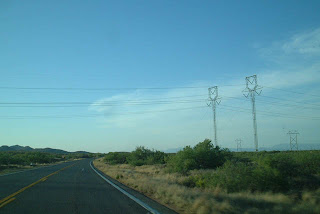 Today is the fourteenth day of tour. Tom asked if anything exciting or fun happened thus far. No one answered because, honestly, nothing exciting has happened. I am not complaining. I’m a person content with the normal, a man chained to routines, someone who seeks solace in the comfort of the expected. As I stared off into that black basket full of silver stars last night, I asked myself if I am happy doing this. Indeed, such ruminations upon great existential questions are not uncommon mental fodder for mercurial, indecisive, constantly doubting 28 year olds such as myself. In four weeks this will be over and then what? Back to the job I hate at the college bookstore, a job that doesn’t pay me enough to survive on? More tours? Should I act my age or live out my dreams? Is this my dream? And what about my girlfriend, will she tolerate me doing such nonsense as traveling across the country with a band that expects no income whatsoever from its work? Will she leave me upon my return? I wouldn’t blame her.

I’m in the backseat of Greg’s minivan as Josh drives. Matt and Greg are asleep and snoring loudly. Our singer Billy travels with the band we are touring with, and who knows where they are. They consist of Alexander, Jamie and Eric. We’re quite the traveling band of malcontents and miscreants.

The terrain grows more desert-like by the minute, more barren by the mile.

I attempted to read Rushdie’s Satanic Verses, yet it made no sense and bored me. You can’t concentrate in this van. I loved Fury. I finished Palahniuk’s Lullaby in three days, but that’s fast food for the mind. Maybe I’m just not that smart, not as bright a bulb as my college degree tells me.

I still await the bull’s eye, the scarlet scourge of Lyme disease. Damn the bloodsuckers, the mini vampires lurking in the bushes and swimming on the wind from the trees. Stay inside, please, I implore you, STAY INSIDE.

Touring is a weird trip. It seems to mostly consist of malnutrition, sleep deprivation, frayed nerves and blasting tempers like firecrackers. The band has done considerably well. We pay ourselves $10 per day. Not a king’s ransom (or what the guys in The Strokes or something pay themselves), but better than paying for everything out of our own anorexic wallets. We’ve managed to trick kids into buying our shirts and records.

They were extroverted and gracious to a fault in Texas and New Orleans. They talked my ear off, so much I could barely put it back on later that night. All of this was a nice change from the aloof, disinterested and cold east coast, our home. Yet this is a fickle trade we’ve devoted ourselves to. These kids won’t attend the show if we ever return. We’re onto our fourth record and they want the first. Nature of the Beast.

We stayed at a motel just outside that city along Route 10 that night. A punk at the venue loudly, drunkenly told us, “You ain’t stayin’ here!” I hope he chokes on his vomit in his sleep and dies a slow, painful, suffocating death. I am losing my patience. Billy and Alexander went for a jog around the hotel. They boasted bold plans to exercise and run every day. They got halfway around the block and came back sweating and gasping for air. No sign of physical activity since. 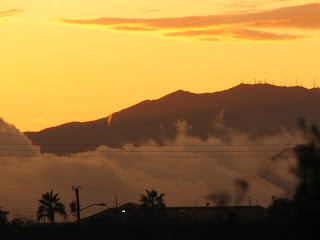 We’re driving into a black abyss here in New Mexico. I hope we survive the oncoming storm, which only could have come up from Hades.

The mouth of the sky swallows us as rain pummels the van. Smiths on the stereo, maybe the last music we hear…we die to a crooning, morose Morrissey. A hearse tows a mashed up car alongside of us. This is New Mexico.

Passed another car wreck. The rain comes and goes and with it cold and warmth. I saw a car facing the wrong direction in the eastbound lanes of I-40. Its hood was smashed to the windshield, like a crushed can. Then we drove by an SUV flipped on its side and wrecked against the guardrail in our westbound lane. The roof was caved in completely. A Navajo blanket lay near the vehicle’s corpse. I don’t know how anyone could have survived. This is the second serious accident we’ve come upon. The other was in Tennessee or Mississippi or maybe it was Alabama. On I-84 or I-35 two cars sat crunched together with rolls and rolls of toilet paper strewn across the pavement. We noticed people standing at the passenger side window. When we drove past, we saw a figure dressed in white slumped across the driver and passenger seats.

And now the rain roars against the van like wild animals threatening to tear through the roof. Outside is the Painted Desert. This must be what it’s like for people who see the ocean for the first time. This is new to me, sights seen only in textbooks or TV. We’ve gone by ghost towns, burned out abandoned cars and the carcasses of gas stations, convenience stores and auto repair shops. Here near the Arizona border I see scattered tiny homes built by brick and clay, a church nestled in the brick-red cliffs, but no people and no animals, nothing at all alive. This is another planet.

More weathered, decaying billboards for Indian Trading Posts and Indian Gift Shops. This is the land our white forefathers stole from Mexico and both stole from the indigenous peoples of what we call America. What do the Navajo and the Apache and the Cherokee have to show for this crime today? Their tribal namesakes are used as advertising tools to sell cars. A billboard announces: “NOW IS THE DAY OF SALVATION.” For whom? Back east where the political and economic power is waged from the boardrooms of Washington and New York, no one sees the remains of the conquered, the last vestiges of the destroyed. Like everything else that’s undesirable, they sweep them under the carpet, they being the media, the government, the teachers and the captains of industry. But you can see it, just drive 2,500 miles west and see the beauty of this cemetery, the green, pink, red, orange and yellow cliffs. The Pilot rest stops, the slaughterhouses, the sea of sky swallowing the horizon in every direction. I feel tired and sick, yet I am mystified and humbled by what I see here. And this is just a rock tour.
Posted by Casey Boland at 2:16 PM