We’re driving from Houston to Austin. It’s the land of the Bushes, Cheney’s and oil. We pass by the big drums and machinery sucking the black gold up from within the earth. The smell fills the van, a thick, hearty aroma. The odor of opulence. Oil pumps through the veins of this nation. Without it we cannot survive, at least according to the way of existence in this society.

What heats our homes, runs our cars, allows us to cook or gives us a vast array of products and commodities? Oil is thicker than blood. Look at Iraq and the Middle East, or down in Africa or over in South America. The western world, particularly the U.S. throws its military muscle all around the globe in an effort to control the supply of this precious commodity. But I am getting ahead of myself. This is a rock tour after all.

We’ve played eleven shows, most great. Kids have come, watched, sometimes danced and sung along. They’ve purchased our wares and stuffed our perpetually hungry cash box. They’ve introduced themselves and befriended us, let us sleep on their floors or raid their refrigerators. This is the punk underground in action and we surf upon its crest.

But who cares about all of that hoo-ha. All I can think about is Lyme disease.

Last night after showering in a small apartment in Houston, I noticed something tiny and brown clinging to my left leg, down by my ankle. I tried brushing it off, assuming it was dirt or a speck of leaf. But it remained tight against my skin. I leaned down and squinted (no glasses on in the shower). With horror I realized what it was: a tick, a fucking blood-sucking disease-carrying, life-halting tick. It was bigger than the ones I’d seen back in Jersey. I noticed a white spot on its back, the dreaded mark of the beast.

I’d been infected for sure. A white spot means this mutha transmits
Lyme disease and now it injected its poison into my body. I began squeezing at the tiny monster, pulling frantically. It felt so small and lifeless between my fingertips, as if such a creature of seemingly no stature could never cause me any harm. But I knew the awful truth, the destructive and debilitating possibilities presented by this tiny bundle of terror. I pulled and felt him holding on. He knew a good meal and he didn’t want to give it up. 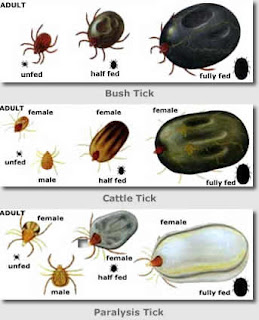 Finally I ripped him free and inspected what wiggled between my thumb and forefinger. His little legs spun wildly, clawing for skin, blood, meat. I checked to see if his head remained inside me and then sent him to his watery grave down the toilet drain, with some degree of guilt. Even such a mortal foe as this arouses sympathy. But I couldn’t allow this criminal to run free in our society, no, he demanded a quick execution for his crimes against me.

I boast a bruise where I tore him out. Now I await the inevitable red bull’s eye, the certain signifier of my doom. And I have 30 days left of this tour.
Posted by Casey Boland at 11:26 PM